The Irish faithful invited Bishop Williamson to Ireland to celebrate the 30th anniversary of his episcopal consecration. He has made many journeys around the world this year including France, Switzerland, Belgium, Italy, USA, Ireland, Korea, Japan to name a few where the faithful have requested a visit so as to celebrate this historic anniversary.

A report of this latest visit to Ireland is here —

administer confirmations, give conferences and inspect the growing work at the Priory in West Cork.

Beginning with a Mass and conference in Tralee, County Kerry he then visited the Priory. On Saturday he traveled into Cork city and gave a conference where he linked the gradual erosion of catholic truth in society and the varying reactions to it. 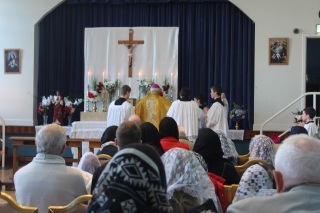 On Sunday before an impressive crowd of well over a hundred, he administered the rite of Confirmation to eight souls which was then followed by a party to celebrate his thirty years as a Bishop.

An enjoyable time was had by all and was well attended by laity from all over Ireland, even as far away as Belfast. Credit to all involved, religious and laity, for all the efforts made in making the event such a success. 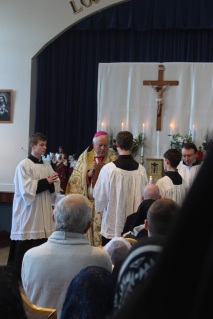 Thanks to an attendee for the report.
Posted by Traditional Catholic at 08:27

This entry was posted in Biskup Williamson, Uncategorized. Bookmark the permalink.