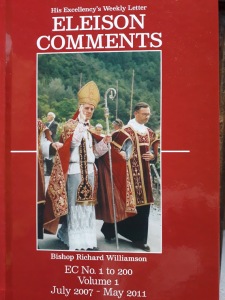 We are happy to announce the publication of the first volume of Bishop Williamson’s ‘Eleison Comments’ by Stella Maris Editions of Broadstairs, Kent.

This first volume is a hard back edition, with over 300 pages all the first 200 ‘Eleison Comments’ and many colour photographs.

The suggested donation is £20 and can be made through our Donations page.

We are grateful to our friends at http://tradcatresist.blogspot.com/ for their review of the book —

A recent ‘Eleison Comments’ featured the following-
“the ability to falsify reality is growing by leaps and bounds. Thoughtless geeks have now developed technology that makes fake reality indistinguishable from real reality. “I don’t think we’re well prepared at all. And I don’t think the public is aware of what’s coming,” said the Chairman of the U.S.A. House Intelligence Committee. He was discussing the rapid advance of synthesis technology. This new artificial intelligence capability allows competent programmers to create audio and video of anyone, saying absolutely anything. The creations are called “deepfakes” and however outrageous they may be, they’re virtually indistinguishable from the real thing. No sooner had we adjusted to a world where our reality seemed fake, than things that are fake became our reality.
This horrifying development is just the latest example of how difficult life is going to be in the future for our offspring and society in general. For how will truth be proven if everywhere we not only have lies but artificially created ‘false truths’.

To be able to find the truth is becoming harder in many ways. The internet is now awash with ‘indultarian’ experts, who having seen certain errors of Pope Francis, are now calling for Trads to join in their latest ecumenical crusade ($$) which will ‘rid the Church of this current crisis.’ Often these ‘new recruits’ whilst good of heart, remain saddled with baggage from their conciliar days. It could be a misplaced view of Pope Benedict XVI, or Pope John Paul II. Or else a complete misunderstanding of the (past!) differences between the SSPX and the various Ecclesia Dei groupings. Quite often it might be Theology Of The Body/NFP hangups. Not to forget the obligatory warnings of the dangers of Islam whilst, of course, ignoring those of the perennial enemies of truth.

However, the one thing that unites these various internet warriors of ‘truth-telling’ is their knee-knocking, teeth-chattering fear of being linked with a certain English Bishop. For there are certain truths which just cannot be told if we want our YouTube accounts to remain monetized and we want to still be invited to a seat at the table next to our, ahem, conservative friends at the latest ecu-trad conference.Therefore the release of the first hardback compilation of Eleison Comments by Bishop Richard Williamson is a welcome breath of fresh air. No spin (Deo Gratias!) just plain, unvarnished, truth.

Even subscribers to the weekly email version will be surprised at just how many different subjects were covered between July 2007 to May 2011 which this first volume contains. Politics, art, family life, literature, music, prepping etc are just a few of the issues addressed, never mind those subjects controversial enough to have an SSPX branding employee reaching for the whisky bottle!

Including a superb introduction by Dr David Allen White, I leave the final word to Fr Steven Webber from his excellent contribution to the almost 350 page volume “Why read the Eleison Comments” (tradcatresist)
“Thus, Bishop Williamson has been a defender of the integral Catholic way of life. In a world darkened by sin and apostasy, he has not gone liberal to meet the world, but he has ever attempted to pull the world to God. Therefore, the Bishop has applied the Faith to an ever more surburbanized and industrialized world more glamorous and seductive for Catholics in the world. He has denounced this inhuman way of life which the suburbs and machines offer because it has essentially bankrupted too many hearts and souls. In these moments the bishop’s voice and teachings especially were clear and enlightening for the cause of Truth.”

The book is available in the UK from respicestellam2015@gmail.com

This entry was posted in Ruch Oporu, Uncategorized. Bookmark the permalink.